Celebrities were out in full force in Lexington this weekend, spending their hard-earned famous dollars in places like Fayette Mall.

The celebrity I’m referring to actually happens to be me, and despite an occasional TV/radio appearance in the Lexington market, I’m far from being famous.

I made small talk with a lady and her family while looking at a display in a University of Kentucky-themed store Saturday afternoon at Fayette Mall. Nothing major – just regular “hey, we’re standing in line and helping the economy” comments, sharing a few laughs at our witty back-and-forth. 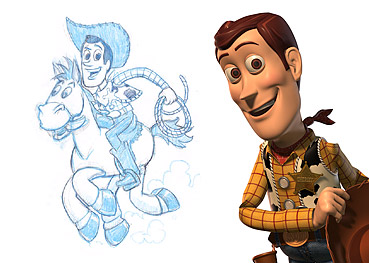 I have, in fact, heard this before, and it can go one of two ways. First (and negatively), there’s Woody, the cowboy plaything from Toy Story, which I heard a few years ago based less on my affection for large cowboy hats and more with my protruding chin. 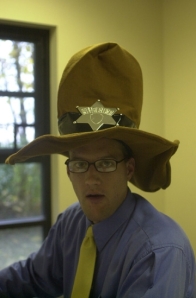 The other, and far more common (and positive) comparison is with Woody Harrelson, he of Cheers and White Men Can’t Jump fame. (Woody Harrelson is also known for his love of the weed, as is Matthew McConaughey, a fella I have also been compared to, which further makes me wonder why people look at me and think “pot.”) 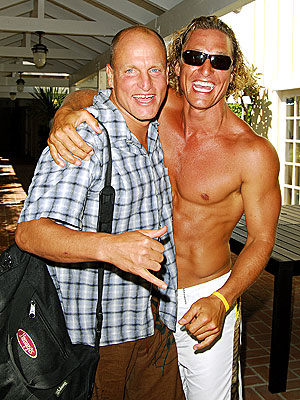 Two birds, one stoned
But back to the mall. “Yeah, I hear that one quite a bit,” I told my new fan.

Her family, puzzled by the enthusiastic reaction over my Woodyness, looked on, a combination of embarrassment and curiosity, but mostly embarrassment.

She turned to her crew. “You know, Woody from Cheers,” she told them. “He looks just like him.”

“Woody Harrelson,” I explained to them.

Her kids, ages 12 to probably early 20s, nodded politely without a clue as to the identity of this “Woody Harrelson” character.

She kept trying to think of other movies Woody has been in, and I wanted to help, but the only thing coming to mind was The People Vs. Larry Flynt, and I just thought it a tad inappropriate to reference a pro-porn movie in a family setting two days after Thanksgiving. So the woman keeps saying Cheers and White Men Can’t Jump until two things happened:

Thing No. 1 to Happen: Her kids started saying “oh yeah, Woody Harrelson. I know who you’re talking about.” I still doubt this dubious claim, thinking it had more to do with a way to shut their mother up in light of …

Thing No. 2 to Happen: People in the store, both staff and customers, started looking at the commotion.

We were now embroiled in what could best be called “a scene.”

I should also note that I was decked out in jeans, a navy thermal and an eccentric 1970s-era blazer I picked up at Goodwill, so the entire look could vaguely be considered “minor celebrity goes to the mall.” I can see the confusion.

I should further note that this family is black, and being that I’m white, to a bystander unable to hear the conversation, this entire scenario could vaguely be considered “racial tensions flare up at the mall.” I can see the confusion.

So, just as things start getting some attention, the woman ups the stakes. She whipped out her digital camera.

“Can I take my picture with you? I want to show people that I was shopping at Fayette Mall and saw Woody Harrelson.”

OK, this is too bizarre to pass up.

She hands the camera off to one of her kids, tells another adult woman to join us, and there I am, my arms around two fans in the middle of this store in Fayette Mall, grinning a full-on “Yes, I’m famous; thank you for noticing” grin.

This, apparently, was not enough.

The young man taking the pictures decided he wanted in on the action and asked if he could pose with me, too. I get down on a knee, he puts in hand on my shoulder, I point at the camera and smile like I’m on the red carpet.

I honestly thought they were going to ask for autographs next.

We said our goodbyes, and I told them they legitimately made my weekend. I walked out of the store, with the customers parting ways as I passed, all staring and wondering just who exactly this famous person was in their midst.

Some, no doubt, started texting friends that Woody Harrelson was at the mall.

Which is silly, really, because everyone knows I look like Toby Keith.