That’s what happens when you learn that a place as meaningful as Sue’s Hot Dogs is selling its business. Sure, the new owners could possibly keep that Steamshovel Road tradition going, but it just won’t be the same, no matter what happens. 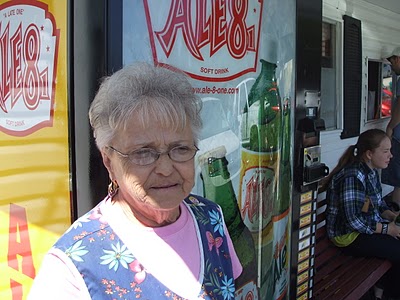 For me, it wasn’t just about the hot dogs. It was about my childhood, those summer and early fall days spent with my then-best friend Shane Carpenter (Sue’s grandson), in the white house next to her hot dog stand. The best part of the start of every college football season was going over there on Saturdays around noon, ordering a couple of hot dogs with chili, a bag of Grippos, a bowl of chili or vegetable soup and an Ale-8. Shane and I would feast, and as other friends showed up, they’d make their orders then come in for the games.

Our favorite teams won. Our favorite teams lost. New friendships started. Old friendships grew. Fights broke out. Karate kicks flew (well, that was just from Shane’s grandfather, but still, they were plentiful). Through it all, we had those hot dogs, those chips, those drinks. And that family, Sue and Jesse, taking care of us all.

So, today, as we think back to how much we loved pulling into that gravel lot, walking up to the window of her little trailer and ordering a sack full of hot dogs, I also think back to 1994, when Aaron Saylor and I spent some time doing a silly little radio show – This, That and the Other – on WSKV. (For more about the show, see this blog entry about the Corn Festival). I wrote this song as a tribute to Sue and her tiny, steam-bunned masterpieces.

Forgive the singing (it’s admittedly awful) and the poor production values (although I consider them part of the charm) and enjoy this boot-scootin’ tribute to Sue’s Hot Dogs: