Toward the end of eighth-grade and into high school, I became hooked on stand-up comedy. I would watch A&E’s An Evening at the Improv, MTV’s Half-Hour Comedy Hour and any other collection of comedians I could possibly get, all while soaking up the styles, deliveries and word play.

I’m guessing, though I can’t be fully certain, that somewhere along the way I caught a glimpse of Jerry Seinfeld (now that I think about it – and yes I have honestly thought about it during the amount of time to write “ … cant be fully certain …” and this parenthetical aside – I probably saw him on The Tonight Show). The humor struck a note (or, if you prefer, my funny bone), so on evening of May 31, 1990, this then-high school freshman turned on NBC and watched what was at the time called The Seinfeld Chronicles. 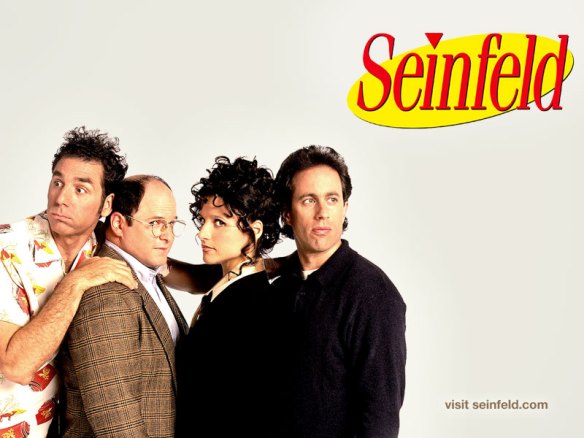 I remember telling friends (specifically David Rogers, and if he denies this account, I’ll call him a liar, despite the fact he’s now a youth minister) about the show, encouraging them to watch it, saying it was highly unusual and extremely funny.

By the time Seinfeld (it obviously dropped the “The” and “Chronicles”) went off the air in 1998, it had become critically and commercially acclaimed, giving the world such pop-culture phrases like “sponge-worthy,” “no soup for you” and “yada yada yada.” It changed the course of televised comedy in a way that perhaps no other network show ever will again.

For me, the impact was monumental.

At the start of 2011, I created a list of pop culturey things to do this year, and one highlight was to rewatch all the Seinfeld DVDs in order. During the shows run and repeats, I thought I’d caught all but about 5-10 episodes (turns out I only missed one), so not only did I want to scratch those off the list, I also wanted to revisit some of the classics to see how they held up.

They aged just fine, thank you very much. Episodes like “The Contest,” “The Boyfriend” and “The Bizarro Jerry” all made me laugh just as much this year as they did before, clearly showing that Seinfeld is a classic series that will stand up years from now.

More interesting, for me, was how certain shows served as miniature time machines, taking me back to both specific instances and general timeframes. Anytime I watch the Season Four masterpiece “The Contest,” I’ll always think about watching a taped version of it my freshman year at the University of Kentucky with Aaron Saylor, Brinton Epperson and Daylan Kinser. I’d seen in multiple times, and I knew these three friends would find the concept of being “master of my domain” hilarious.

I can still hear Aaron’s howl/laugh when Kramer drops out of the contest, and the three of us immediately began quoting the episode as we walked down the dorm’s stairs to go find food. Instead, my brother-in-law and uncle greeted me in the lobby with grim faces and frightening news about my mother’s brain aneurism. The total switch in moods was so surreal, that looking back now, knowing my mom eventually survived the incident, it causes the laughter from the show to be amplified, and a perfect piece of television becomes even more perfect. 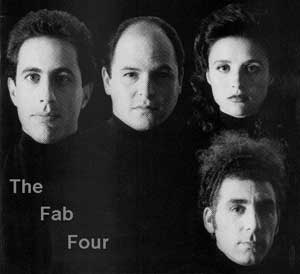 Seeing shows from the seventh and eighth season had me back at UK, finally getting my grades moving in a positive direction while working an evening shift at Gall’s. I’d miss the Thursday episodes as they originally aired, but thanks to the wonders of a time-set function on the VCR (for my younger readers only familiar with DVRs and Hulu, Google it), the episodes would be recorded, and my roommate James Clark and I (and often a collection of co-workers) would watch it when we arrived home from work. Then I’d think about the other times at Gall’s, including late-night Grand Slams at Denny’s with Horton and Newkirk, and I’d simultaneously miss my youth and be glad I never had to live through it again.

I also marveled at seeing how much the show had shaped who I am, both in the sense of my sense of humor, but also in various aspects of body language and life in general.

I am in no way suggesting I’m as funny as Seinfeld or Seinfeld, but the show helped me learn to observe the unique oddities surrounding me, which served me well as I became a journalist. I’ve often wondered if weird things happen only to me (or the people around me), but it’s much more reasonable to think they happen to everyone but most people don’t take note. I credit Seinfeld to my ability to take note.

With body language, I had no idea I aped one of Jerry’s signature moves (standing up to make a point, arms outstretched, index fingers up, moving the arms out away from the body) until I rewatched the series. I didn’t even realize he did it, but the first time he did, I laughed ridiculously hard, then doffed my cap and sent him a royalty check for the move.

I also share a few other traits with Jerry: a love of the New York Mets, quirky friends, being mistaken for gay (not that there’s anything wrong with that) and an endless parade of short-term relationships that fail because of silly reasons. I’ve been told on multiple occasions that my reasons for losing interest in someone are downright Seinfeldian, a claim I can’t really dispute.

I’ve also lost interest in women for liking Nickelback (I find my reason totally justified and will always lose interest in women who like Nickelback), for being overly excited about a new Matthew McConaughey romantic comedy (also justified) and for having terrible spelling in text/Facebook chats (not so justified, but I still maintain my stance that it’s very annoying, or as she would have put it, VeRrRRy enoyin).

It makes sense for the show to have invaded my life in all these different ways. It went on the air when I was 14 and ended when I was 22, and in between are among the most formative years for a person’s personality. It’s when I began developing my own style in terms of humor and writing, and though my tastes have changed (and my humor and writing have, I hope, improved), the seeds became planted, in part, in May 1990.

Over the years, Seinfeld has been lauded as a show about nothing, just a collection of our New York friends who are not productive members of a functioning society. The show got reduced down to being a collection of observations, but for anyone actually observing, it was much more than that, including as I mentioned just moments ago, ways to write in unique ways.

Seinfeld, thanks for nothing.

3 thoughts on “A blog by Art Vandelay, or How Seinfeld Made Something Out of Nothing and Shaped My Life”